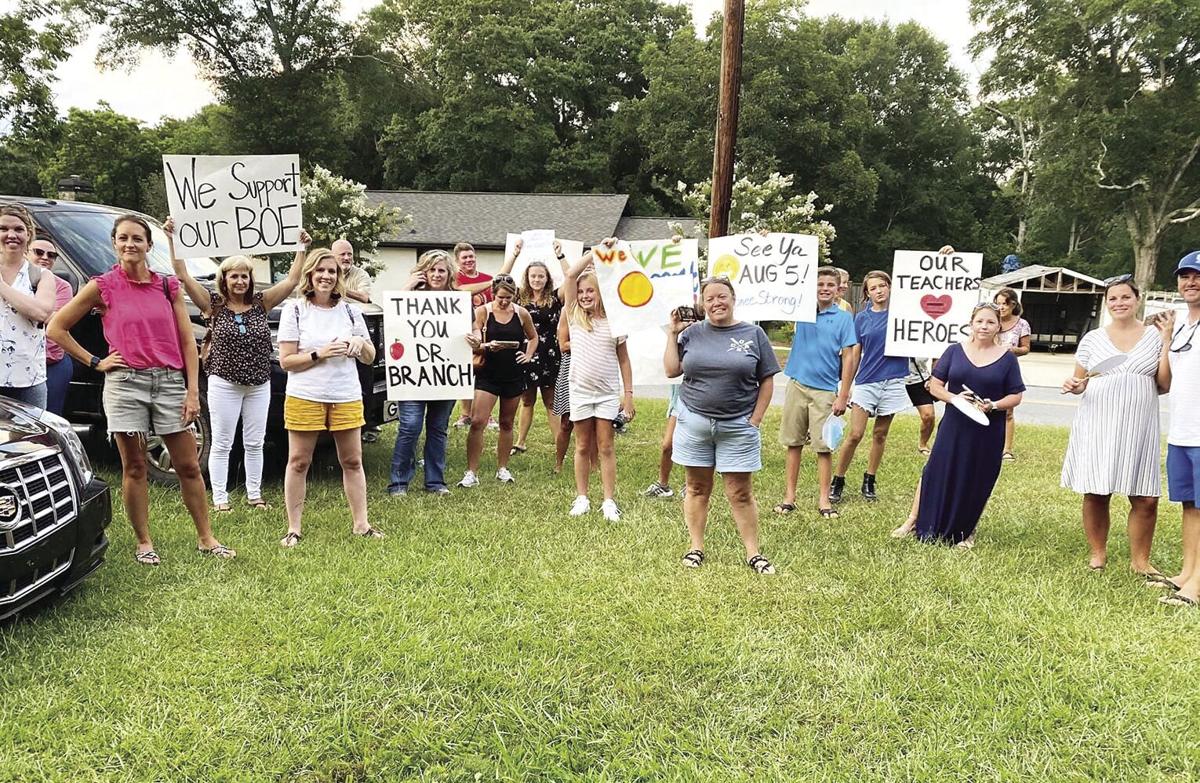 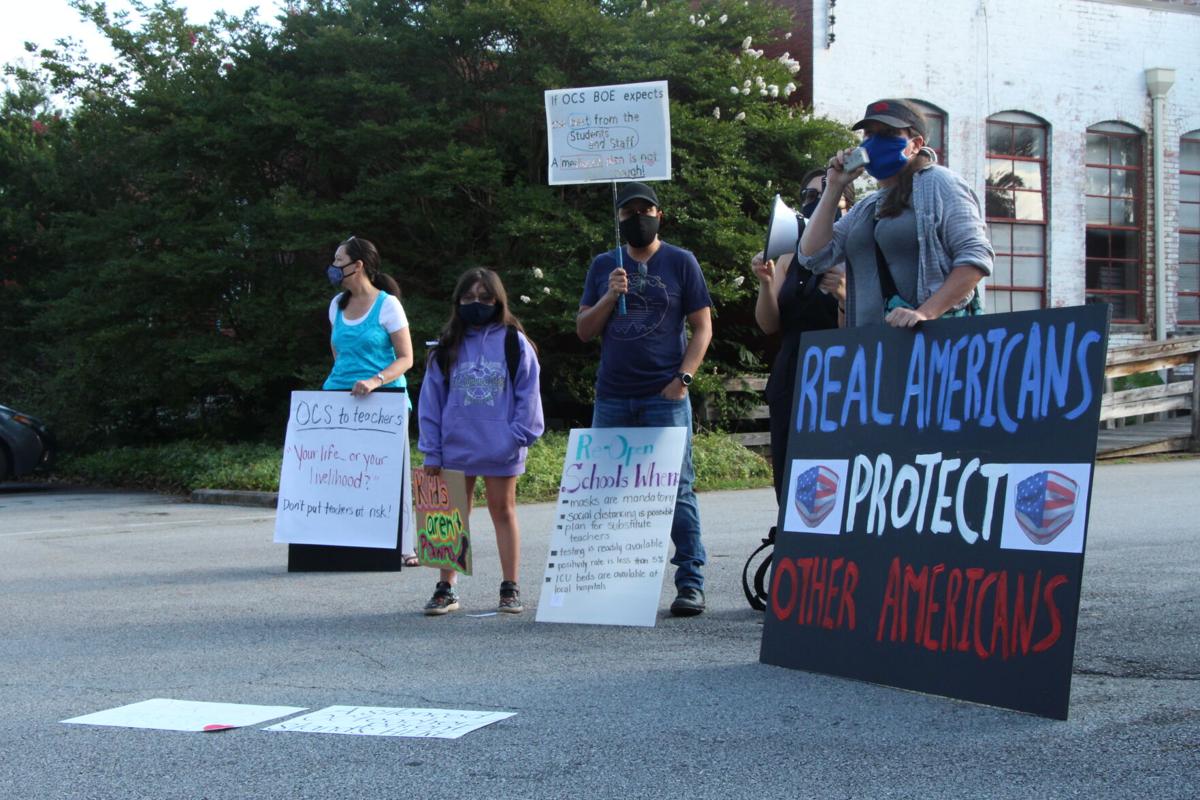 In contrast to last week’s signs stating, “Kids aren’t pawns” and “Don’t be a COVIDIOT; mandate mask wearing,” those bearing signs on Monday displayed messages like “Thank you, Dr. Branch” and “We love our BOE.”

OCS Chief Academic Officer Claire Buck informed the BOE that only 11.5 percent of students have opted for distance learning.

In an earlier survey, 64 percent of respondents indicated they preferred a delayed in-person start to an Aug. 5 digital start if school could not begin in-person Aug. 5.

Branch said that he has spoken with state and federal health officials on guidelines for reopening, and OCS has decided to begin school Aug. 5 while also offering the virtual option.

Masks will be highly encouraged but not mandated, except on school buses. Detailed reopening plans and the results of two system-wide surveys can be viewed at oconeeschools.org/reopening. Response has been polarizing with a strong emotional reaction from parents, but a majority of those who spoke during a nearly two-and-a-half-hour meeting on Monday were supportive of OCS’ decisions. Of the 12 people who spoke in favor of the plans, three were children.

Oconee parent and Clarke County school psychologist Cheryl Cumbus recommended a delayed start date to allow for simulation of mitigation protocols and time to track the regional spread of COVID-19. She also recommended an in-person and digital hybrid.

Parent Courtney Davis criticized OCS for not being more proactive in responding to the novel coronavirus. She then recommended a mask mandate.

Watkinsville resident Jeff Hood said a mask mandate would be a government overreach. Hood, who raised his children in the school system and is a high school football official, said a return to in-person instruction is essential to children’s social skills.

Multiple parents cited the need for in-person school for children who either have special needs or rely on services like free and reduced lunch.

OCS will provide a washable cloth mask to all students and staff. Director of Communications Anisa Sullivan Jimenez said the district will launch a campaign titled, “Mask Up Oconee,” featuring public service announcements from community leaders.

Malcom Bridge Middle School parent Christian Sanchez-Martinez, who organized the opposition protest last week, said masks should be about “taking care of each other,” especially those who are immunocompromised.

“Every good teacher knows a hardline rule is so much more difficult to enforce than a logical and encouraging recommendation,” Mashburn said.

Principals from schools at each educational level spoke Monday night, with three principals taking the lead among their colleagues.

n When entering school, students must go straight to their classrooms.

n There will be a rotated meal schedule. Some students will eat in the cafeteria and others in the classroom.

n There will specific signage for foot traffic.

n There will be one-way traffic in hallways during class transitions.

n Water bottle filling stations will be used instead of drinking fountains.

n Lunch can be taken to classes.

n Students will not be able to use lockers.

n The cafeteria and field house will be used as classrooms.

n Some classes will be split in half.

n Students will have the option to eat lunch in multiple locations.

n Hallways and stairways will be one-way.

For a full list of mitigation protocols, go to the school details section of the schools reopening webpage.

Critics of the school system’s reopening plans have claimed that teachers did not have enough input.

During Monday’s meeting, Andrea Wellnitz, the creator of the Facebook group, “Safety First-Schools Reopening Group,” read an anonymous letter from a teacher and claimed that 37 educators reached out to her about their concerns or objections.

However, multiple principals said they helped facilitate the creation of open-sourced documents for teachers to provide input and collaborate with administrators.

“Recently, I’ve seen so many harsh statements … by individuals claiming that they’re speaking for the teachers,” she said. “Well, that isn’t me. In order to feel like you have a voice, you have to use it, and I’ve used my voice where I felt necessary.”

Position available for full time maintenance personnel. M-F. Must be