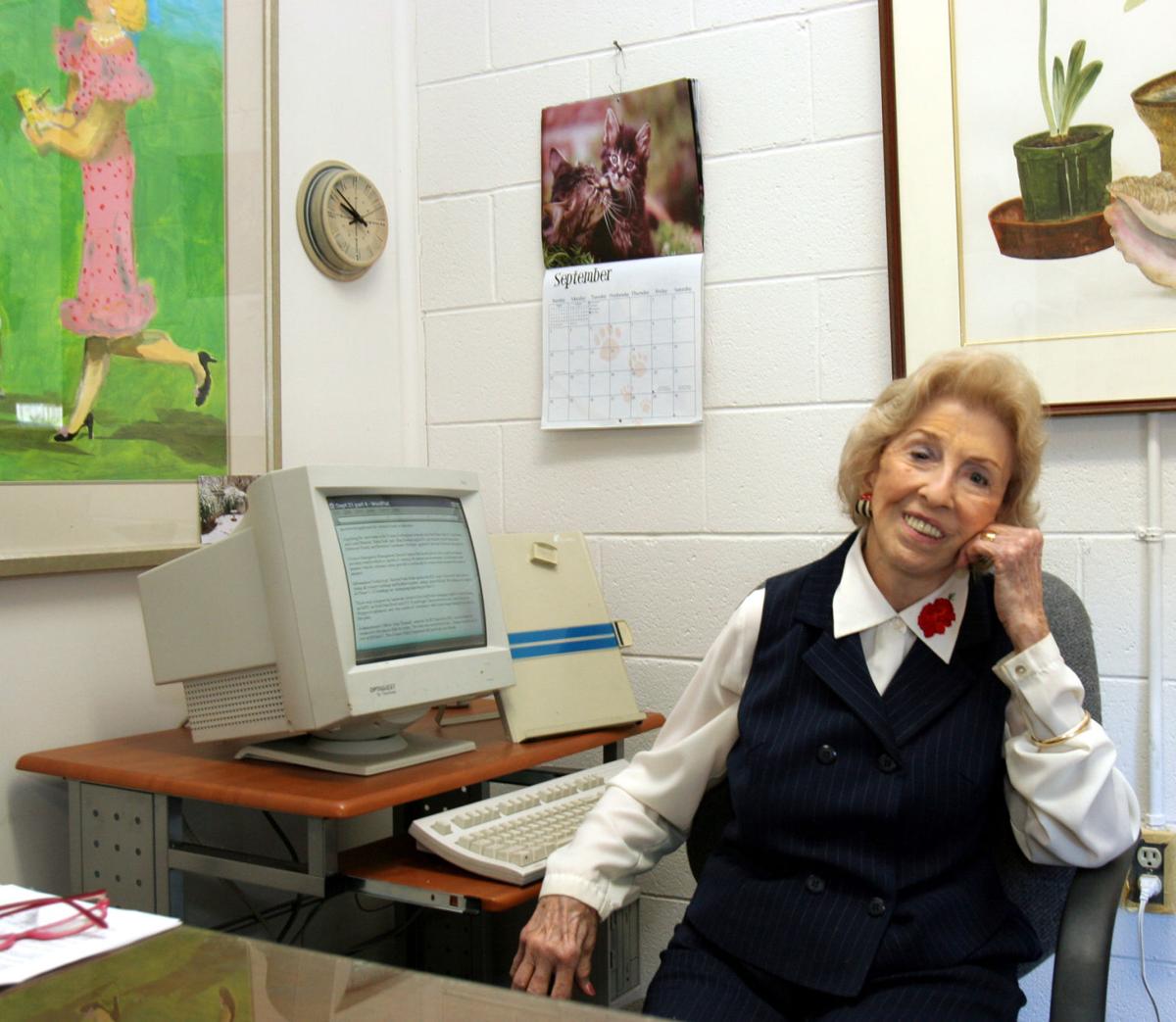 ** ADVANCE FOR WEEKEND, SEPT. 23-24 ** Vinnie Williams, 86-year-old publisher of the Oconee Enterprise, a Georgia weekly newspaper, poses in her office in Watkinsville, Ga., Wednesday, Sept. 20, 2006. Newspaper circulation in large cities may be dwindling, but in many in small towns and rural counties, the weekly paper pulses with local information on school plays, church fundraisers and land deals. (AP Photo/Gene Blythe) 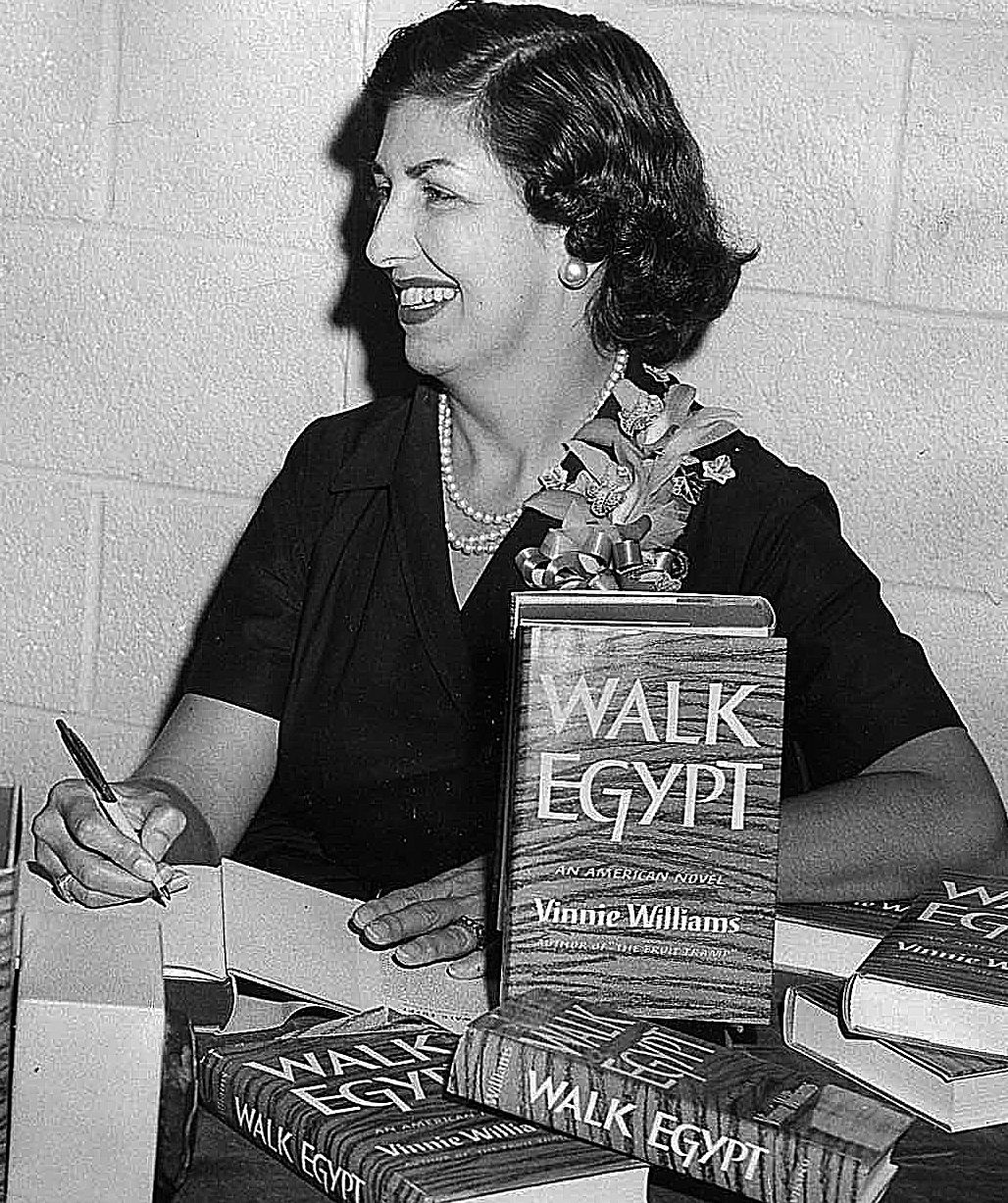 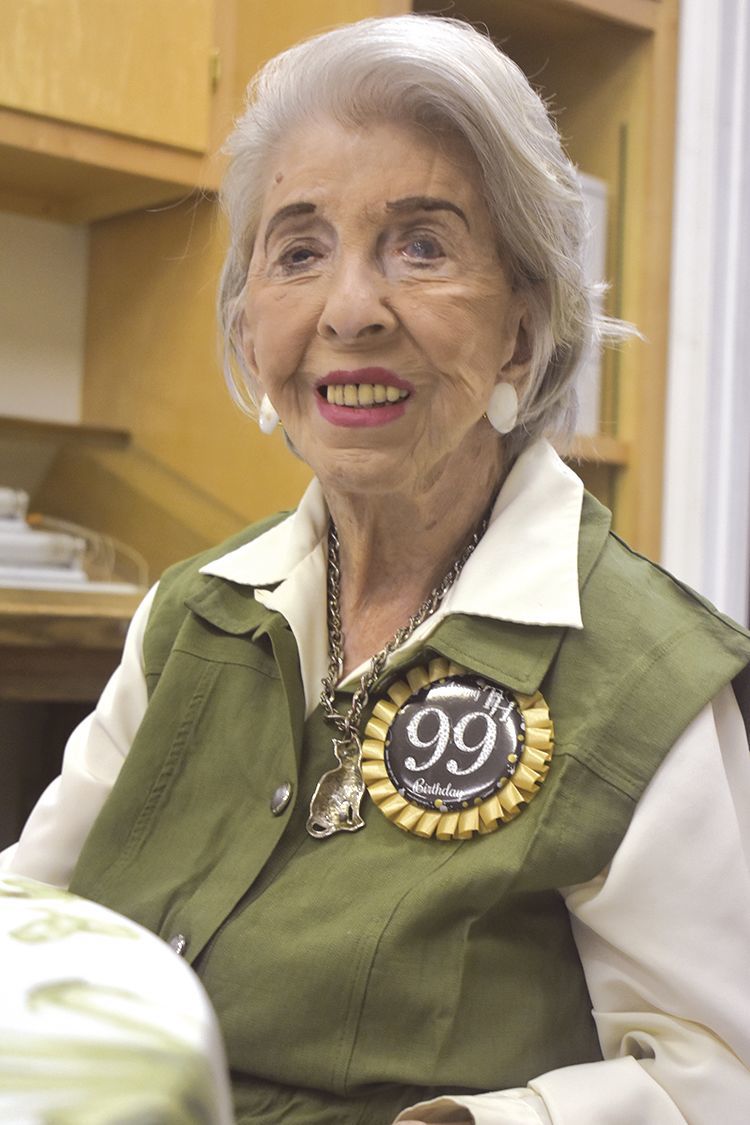 ** ADVANCE FOR WEEKEND, SEPT. 23-24 ** Vinnie Williams, 86-year-old publisher of the Oconee Enterprise, a Georgia weekly newspaper, poses in her office in Watkinsville, Ga., Wednesday, Sept. 20, 2006. Newspaper circulation in large cities may be dwindling, but in many in small towns and rural counties, the weekly paper pulses with local information on school plays, church fundraisers and land deals. (AP Photo/Gene Blythe)

Vivian Williams, a novelist, prolific newshound, beloved columnist and doyenne of community journalism, died Jan. 17, 2020. She was exactly 99 and a half.

A pacesetter in her field, Williams transformed The Oconee Enterprise from a failing weekly broadsheet to a dependable watchdog institution. Her tenure as editor began in 1981 at the age of 61 with noticeable changes to the front page, such as in-depth profiles of community leaders, exhaustive analyses of government meetings and her candid, stream-of-consciousness columns.

Her scuttlebutt-suffused Main Street column was evidence of the old adage, “Never argue with someone who buys ink by the barrel.”

Although often playful or laudatory, at times the column read as an acerbic appraisal of someone in power.

Williams purchased The Enterprise in 1986 and maintained ownership the remainder of her life. While serving as publisher, Williams was committed to daily reporting into her 90s and penned her last column well past her 99th birthday.

Williams was named Marquis Who’s Who in America in 2004 and was honored 10 years later by the Gold Club of the Georgia Press Association for a career spanning half a century.

“Retired? The thought never crossed my mind,” Williams wrote in September 2017.  “These last years have been among the best in my life.”

Before arriving at The Enterprise, Williams took flying lessons at the McDuffie County airport, while writing about a drug smuggler with engine problems who left his plane there.

Williams was once given the moniker “Madam Muckraker” for her lionhearted reporting of a sheriff convicted of violating a man’s civil rights.

Unapologetic of her journalistic duties, Williams weathered several competing newspapers that avoided the kind of newsworthy controversies that tend to divide townsfolk. She shepherded The Oconee Enterprise through changes in technology while clinging to encyclopedias and a filing cabinet of newspaper clippings in lieu of Internet research.

“How about poems that we wake up remembering?” she once wrote in her Main Street column. “Our brain is a grab bag of verses.”

“The rhythm and grace of poetry mirrors life and, in a way, is life,” she wrote in December 2018. “The Bible is the finest book of poetry ever published. The Bible reassures, inspires and gives hope.”

Over the course of two years, Williams visited every church in Oconee County and wrote about the experience every week in The Enterprise. In her late-80s, Williams was often the only reporter at government meetings. And in her mid-90s, she took daily trips to the Oconee County Courthouse.

Williams was born July 16, 1920 and began her newspaper career in 1943 at the Sarasota Herald-Tribune.

Her appetite for the written word was inherited from her father, Joseph Hari Ahlsweh, an immigrant who hailed from Alsace-Lorraine, a territory between France and Germany. Speaking only German, Ahlsweh arrived on Ellis Island in a rat-infested freighter after fleeing his poverty-stricken homeland.

In America, he enlisted in the U.S. Navy and retired as a chief petty officer.

“My daddy was short and good-looking with black curly hair,” Williams wrote in one of her columns. “He was outgoing, full of goodness and humor, and in Brooklyn, he met my mother at an art school. She was a member of an old Dutch family. Although her family protested, they married.”

Williams was born in a house in Chicora, a small subdivision outside Charleston, South Carolina. Her earliest memories were of her father riding a bicycle back and forth to work while her mother took the trolley to sell art to local merchants.

With enough money saved, they purchased a Model T Ford. An automobile allowed Williams to go to dancing school and visit the famous Carolina gardens or Folly Island.

“Later it was Sunday drives to Summerville, a small town a few miles from Charleston,” Williams wrote in a recent column. “That was a living garden of azaleas, magnolias, rhododendrons, dogwood, roses and forsythia. My patient father would park our car and wait until [my mother] sketched a particularly appealing scene. When we look back at our parents, we marvel at how incredible they were.”

An admirer of literature, Ahlsweh collected Louis L’Amour westerns and two volumes on the French Revolution. His favorite story was that of Felix Graf von Luckner, who was a German sea captain during World War I.

Earlier in his life, Ahlsweh witnessed the Franco-Prussian War, which took the life of two uncles. His father lost a leg in that war while his brother died of poison gas in the aftermath.

In the 1934, Williams’ family moved to St. Petersburg, Florida, “at the behest of my daddy’s aunt, a lively little French woman who had married money,” Williams recalled. It was there that Williams met her future husband, Sgt. Roy Williams, although their teenage relationship was platonic.

At the age of 16, Williams began writing a column and feature stories for the old Evening Independent.

“After I learned to read when I was 6 years old, there was no holding me back,” she once said. “I was hopelessly addicted to the printed word.”

Williams graduated in 1941 from Florida State College for Women, now Florida State University, where a professor told her that jobs in newspapers are scarce for women.

Williams began her career as a welfare worker but soon broke into news writing at the Sarasota Herald-Tribune, where she interviewed subjects ranging from wrestlers to circus performers. In the remaining months of World War II, the man she loved died in combat.

Williams later married Master Sgt. Roy Williams, and while stationed in Hawaii, they gave birth to Marie DeWitt (Maridee) Williams, who is now general manager of The Enterprise. Roy died of a stroke in December of 1978.

Williams wrote four novels during her life, two of which—1957’s “The Fruit Tramp,” and 1961’s “Walk Egypt”—were best sellers. The other two were titled, “I Resign You, Stallion” and “Greenbones.”

She received an honorary Ph.D. in literature from FSU upon publication of “Walk Egypt,” which was selected for the Book of the Month Club and optioned several times for a movie.

For “The Fruit Tramp,” she received Georgia Writers Association Outstanding New Author Award. The book was published in several languages and was included in “Reader’s Digest.”

While working at The McDuffie Progress, Williams documented government corruption and business malpractices, including a manufacturer who was discharging polluted water back into the streams.

When her boss threw away weekly newspaper exchanges, Williams would fish them from the wastebasket and take them home to read cover to cover.

“These papers not only gave us tips to possible stories but an overall view of Georgia and Southern culture,” she recalled years later. At The Enterprise, exchanges flowered her desk, and every Thursday, she pulled out her scissors and clipped away.

Williams had the privilege of interviewing Jimmy Carter when he was running for governor. When she spoke of that experience, she would say that Carter was distracted by her doting, longhaired white cat that lovingly rubbed against his dark pants.

“Being the gentleman that he is, Carter continued to pet the cat,” she would point out.

Williams freelanced for the Atlanta Journal and Augusta Chronicle. Two weeks after leaving the Augusta Chronicle, Williams accepted the job as editor of The Enterprise and befriended Dr. Roy Ward, who would become a cherished companion until his death in 2015. Ward, often referred to as “The Gentleman on South Main” in Williams’ columns, left behind a brilliant peacock named Chicopee who roamed the neighborhood for months.

Williams was a founding member of the Oconee County Veterans Memorial Foundation and is a 20-year benefactor of the Oconee Fire Rescue appreciation banquet.

Williams befriended numerous artists, including potters Jerry and Kathy Chappelle, and convinced them to form an artist guild, which led to the creation of the Oconee Cultural Arts Foundation.

Williams’ last column, published Nov. 7, 2019, was about how dogs make for good mascots. However, she was a lifelong fancier of felines.

Williams was greeted each morning at work by resident cat Shelley Winters. Preceding Shelley were Peaches, Angelique and Chrissie.

At home, Williams was adored by whiskered companions Shady, Honeybun and Buffy.

Quoting French poet Anatole France, Williams once declared, “Until one has loved an animal, a part of one’s soul remains unawakened.”

Maridee Williams will be accepting food at her house, 1021 Jeremy Drive in Watkinsville, starting today and at the repass. Anything is appreciated.