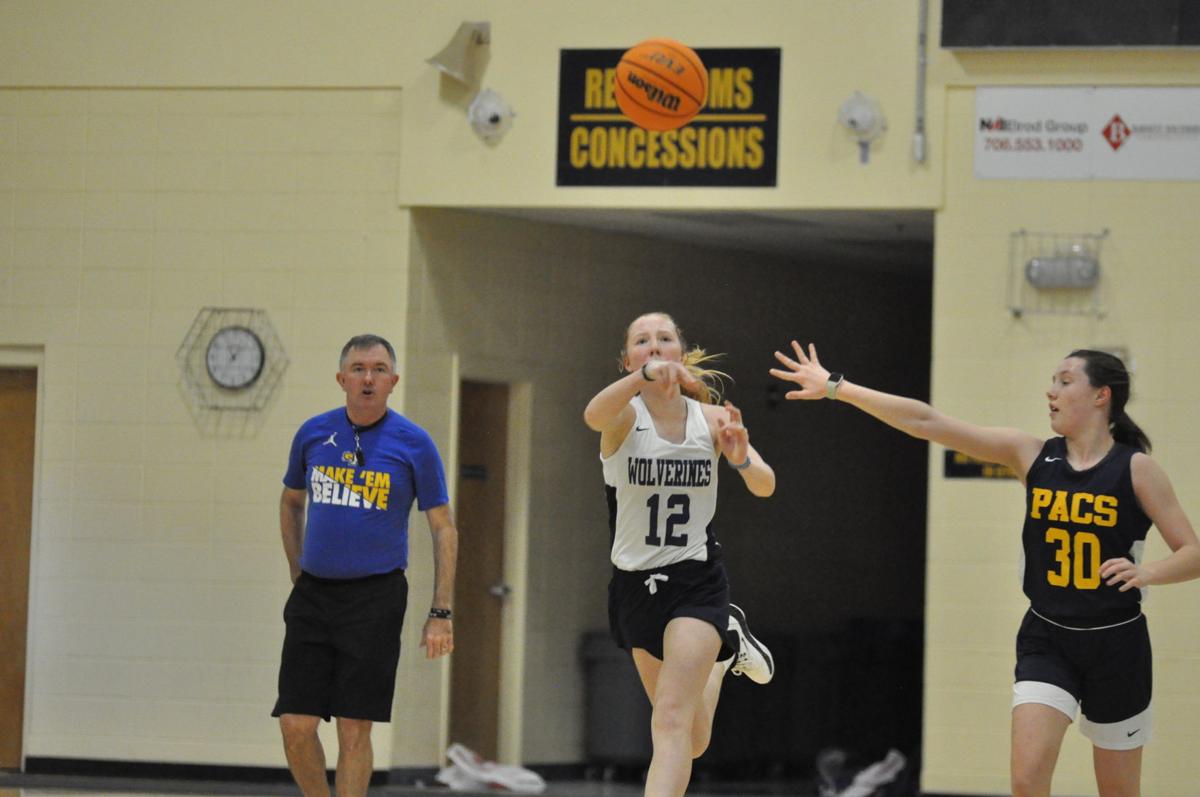 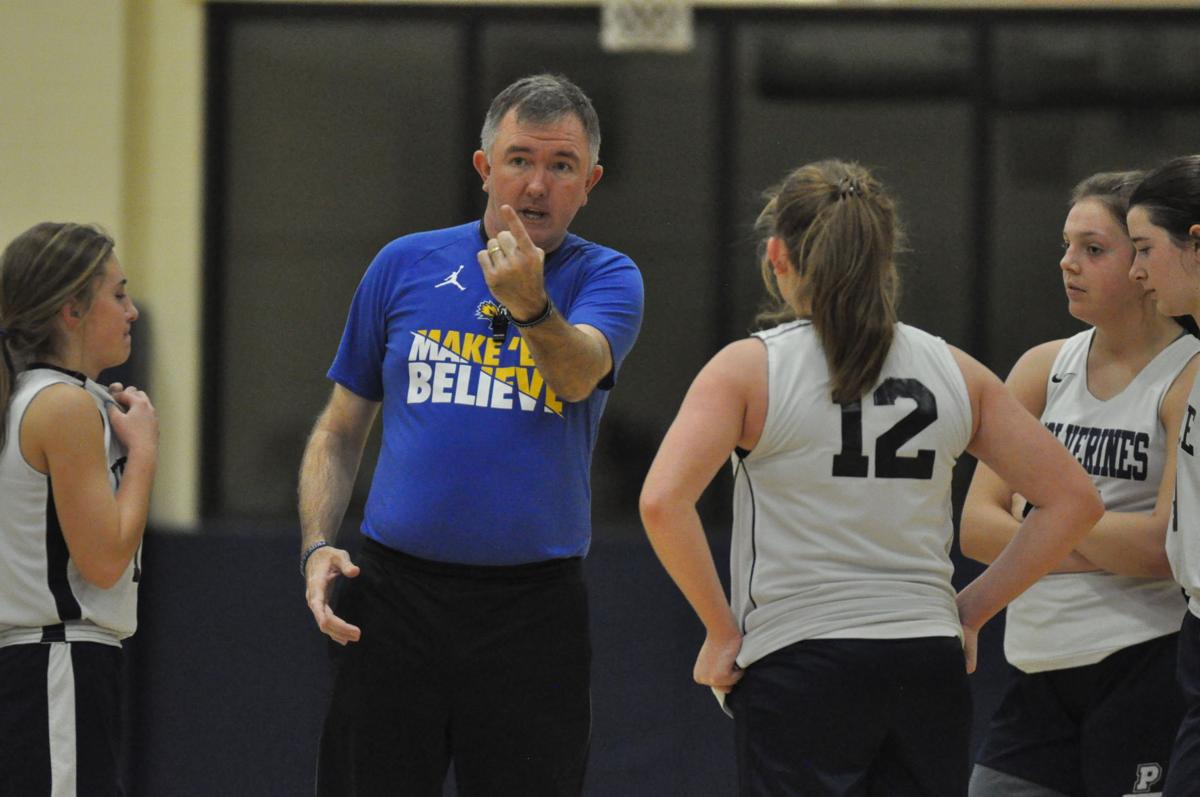 PACS head coach Michael Palmer instructs players during a timeout of a scrimmage during a practice.

PACS head coach Michael Palmer instructs players during a timeout of a scrimmage during a practice.

Hanging on the wall in Prince Avenue Christian School coach Michael Palmer’s office is a photo of the last two girls middle school teams to win their league championships.

Sitting directly above Palmer’s desk is a Christmas gift from a current player Kylie Wilson. It’s a photo of Palmer coaching her and it reads, “Don’t be concerned when a coach is hard on your kid, be concerned when they stop!”

Palmer admits the photo was one of the best Christmas presents he’s ever received. Not because it was what he wanted, but because it was something that showed him that the things that the relationship between him and his most recent team is special. Palmer coaches all of his players hard.

In today’s sports climate, there is sometimes pushback when a young athlete is challenged by their coaches. Seeing Wilson have enough of a belief in the process that is improving as a player is fulfilling for Palmer.

“She could have gotten me a box of chocolates, a new hat or a scarf, but she chose to give me a picture of me coaching her with that saying,” Palmer said. “That’s special. I’m looking at that trying not to cry. It kind of transforms the relationship into how you feel when those people come into the room when you’re getting ready to coach them. When someone comes in the room and gives you something like that it really makes you feel good to see them and you feel good to coach them.”

The gift, the meaning behind it acts as a window into the spirit of the old soul that is the 2019-2020 PACS middle school girls basketball team. The Lady Wolverines want to be coached hard. They want to be the best.

The unique thing about the 2019 team was that they were younger and less experienced than every team they played. The Lady Wolverines didn’t have a single eighth grader. In fact, some of the key contributors on the team were in the sixth grade.

It’s an unusual occurrence in middle school sports; that an entire team feature not have a single player that would be leaving for high school.

The 2019 team went 10-2 on their way to the championship. It wasn’t a perfect season. It was only the beginning. So far, this season the Lady Wolverines are 17-0 and winning by large margins every time they hit the court.

There’s an old school approach to the sport in that the Lady Wolverines have tasted the mountaintop of middle school basketball in their league and they still find ways to want more.

Being the best doesn’t mean they can’t get better. In many ways they have improved on the court. With another year of life and basketball learned the Lady Wolverines are far more mature than they were even last season.

“I feel like it’s an old school type team because I think they’re mentality is very blue collar,” Palmer said. “They show up to practice and they want to work hard. They show up to games and they want to play hard. They always want the best and they always want to win regardless of what it is. If we were doing something, we’re watching film or we’re going out on the track before the season or whatever, they always want to be the best. The kids want you to coach them hard. They want to play hard. We had a scrimmage and one team lost by 10 points and there were three or four that were disappointed. They did not want to lose. They would have liked to have kept going until they caught up and were eventually ahead.”

It’s easy to compare the two teams in the photos on the wall. Both won titles. The 2016 team had players that were a part of 59-game winning streak over a three-year period. Two of those former players have already signed to play collegiately in their senior years of high school.

The Lady Wolverines are athletic, long, good passers, basketball intelligent, complementary of one of another in their skillsets, hard workers, good communicators, relentless in games and blue collar in every sense of the definition.

Those attributes have helped the Lady Wolverines out to a 17-0 start to the season. The lessons they taught their head coach is what gives the current Lady Wolverines the edge for Palmer.

In coaching this year’s team, Palmer has had to undergo growth of his own. Being perfect and winning championships defined success in the early years of his coaching career. Being around and coaching the Lady Wolverines, who struggled in their summer games, has taught him the difference successful and perfection.

The Lady Wolverines won a championship last season without going undefeated. This season, they’ve beaten every team in their path. The relationships built in the last two seasons have run a little deeper for Palmer than they have in years past because despite how much potential he say in the sixth and seventh graders last season, things didn’t go the way he thought they would right away. The Lady Wolverines’ had some growing up to do. They did it and they continue to do it.

“The lessons I’ve learned with this group are insurmountable,” Palmer said. “Some of the teams I’ve coached you just plug yourself in there and just everything from the beginning and everything is smooth sailing. I do feel like I’ve learned a lot with this group. I think there was a lot of learning that was done on both sides. I would say I’ve learned more from coaching this group than any other group...It’s going to be tough when this over and they take the uniform off for the last time and you’re hugging them for the last time knowing you’re not going to coach them again. That’s what makes this special.”