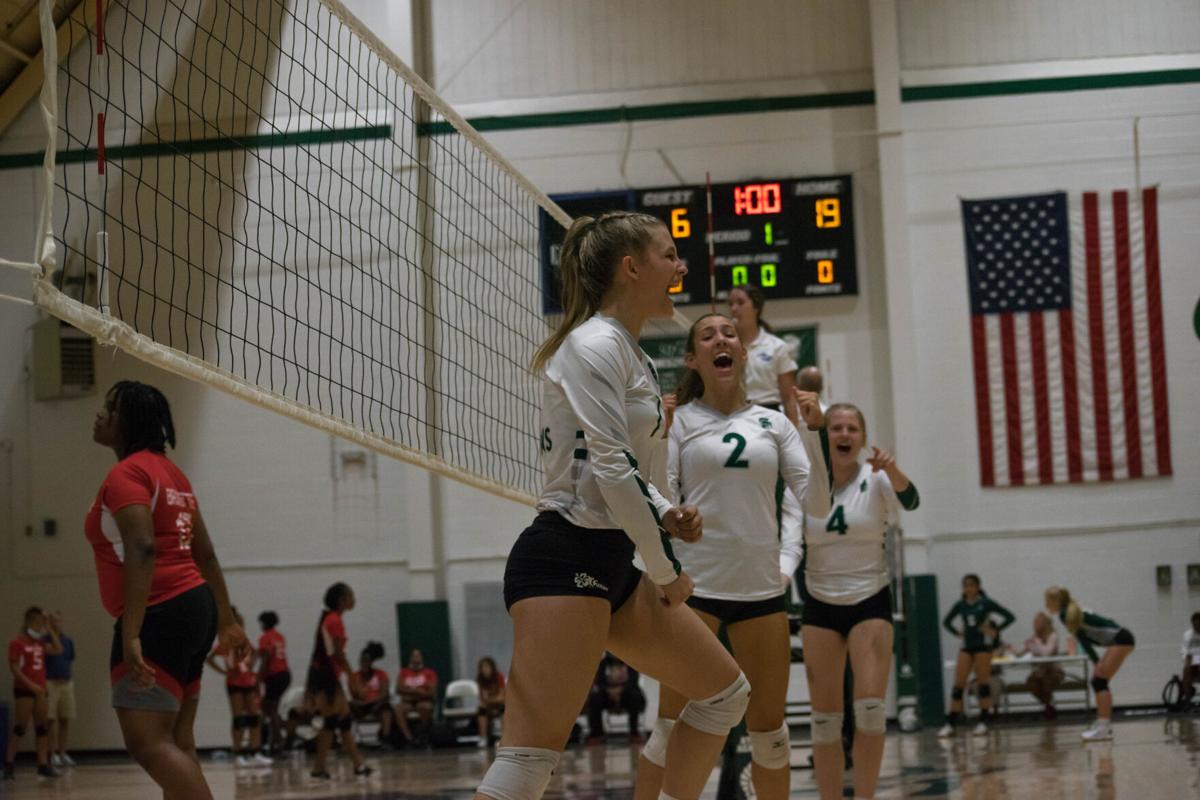 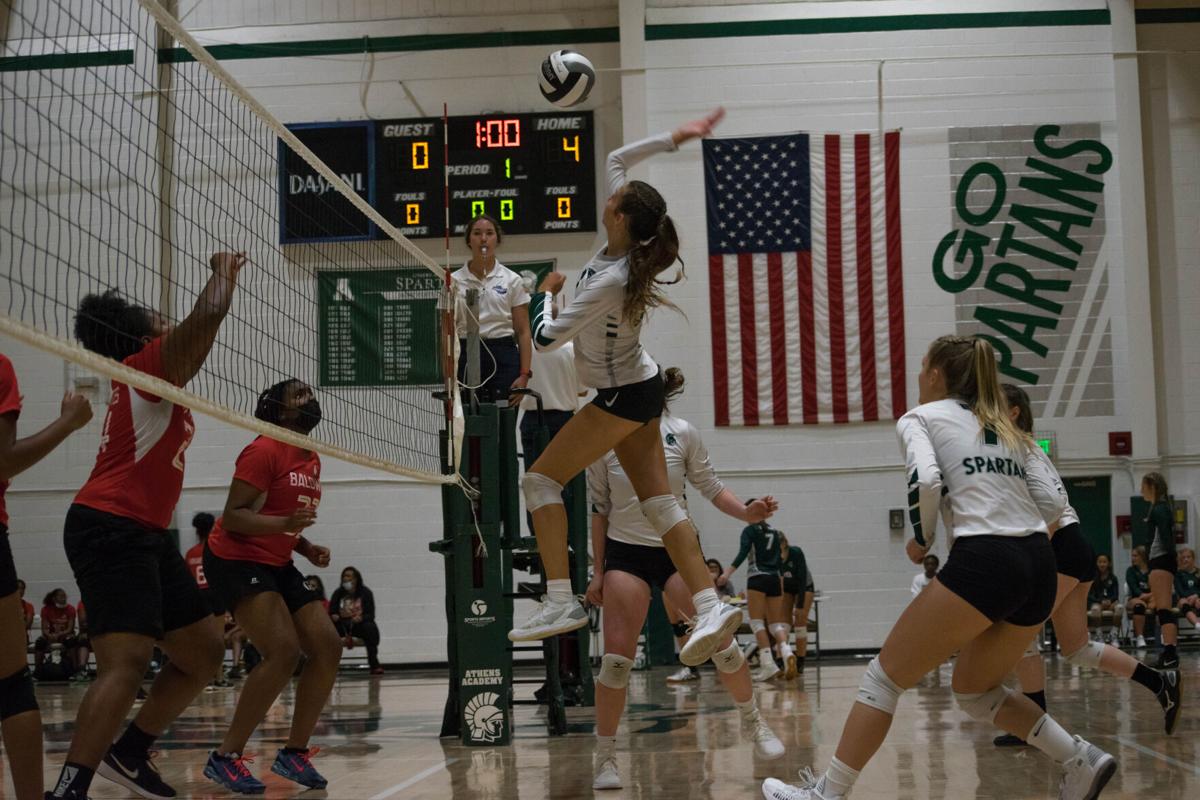 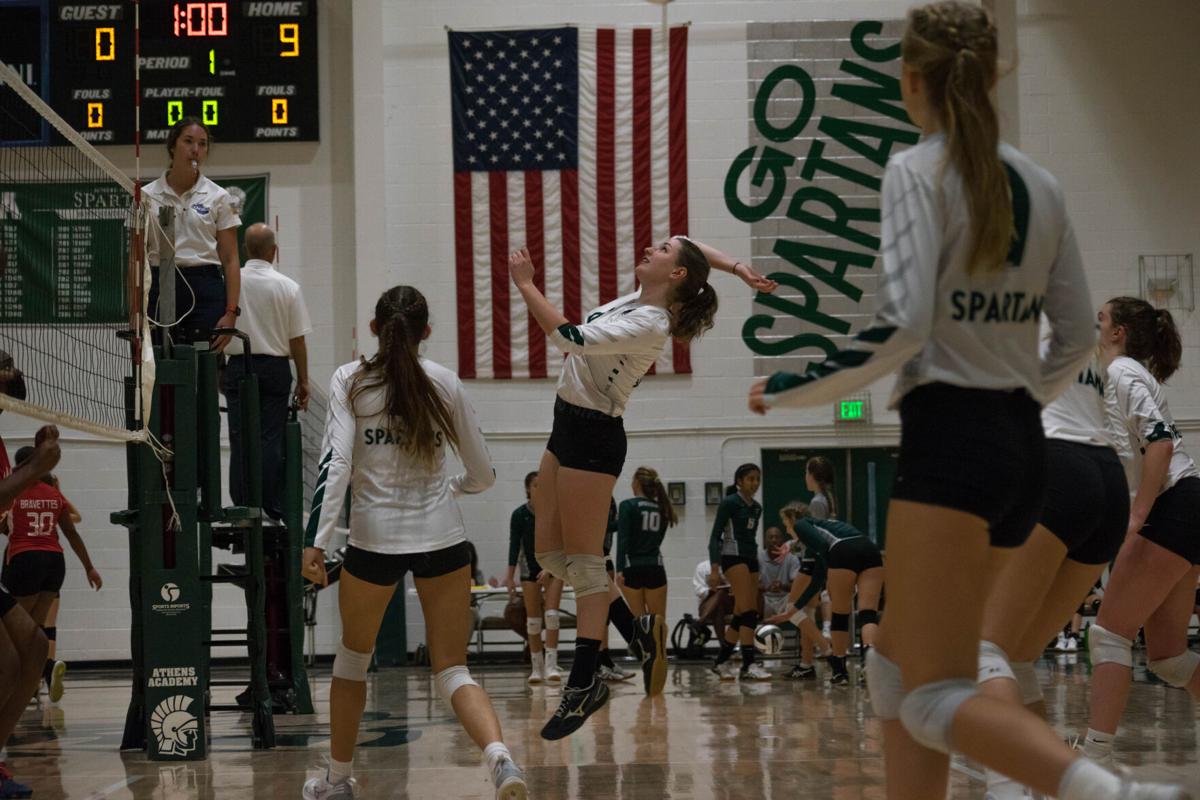 Peyton Wheeler, Addison Ollendick-Smith and Mae Kline celebrated their final home matches as they finish what could be a historic season for the Lady Spartans.

They opened the night with a 25-15, 25-11 win over Lakeside where Ollendick-Smith scored nine kills, her second highest of the season. Athens Academy continued with a sweep of Baldwin, winning with scores of 25-0 and 25-3. In that match, Kline scored her first kills of the season and Wheeler found a season-high seven aces.

Lady Spartans head coach Jane Thomas knew her team would come out to the games ready to play.

“Our team was really happy to be playing at home,” Thomas said. “It had been a while, so they were excited to play in front of their own fans. I also think things had been clicking for us and so they were feeling good coming off of a pretty strong weekend. So, things were just kind of clicking along.”

Coming off a 12-match win streak, the Lady Spartans have gained confidence in their approach to the postseason. Thomas is hopeful the seniors will bring not only their skill, but also calm personas to the court and lead their younger teammates.

“I am hoping their experience will kind of help everybody just keep calm and keep the vision, the common goal, alive,” Thomas said.

Even while playing for the Spartans for different amounts of time, Wheeler, Kline and Ollendick-Smith are all benefits to the team, just in different ways.

They are leaders and friends to the team.

“All three of them lead our team in different ways but they’re all equally valuable to us,” Thomas said. “They have just full respect from everybody on the team and they have been tremendous leaders on and off the court and they are just great team players.”

All hitters and front row players, the seniors have left big shoes to fill after their graduation, according to Thomas. But they are being good examples to the underclassmen and showing them how to lead. Thomas believes her team will pick up the responsibilities easily.

Olivia Nealy, a junior, described what each senior brings to the Spartan squad.

“[Wheeler] has been on the court with me since my freshman year and she’s always been supportive,” Nealy said. “Our middle (Ollendick-Smith), she’s just always hype and looks at the positive side. Even when we lose, she’s always like, ‘Well we got the next game.’ The other senior (Kline) is just the backboard of the team. She always has something fun to say at practice or after games and is always fun to talk to.”

Helping Athens Academy to a 34-2 record before two final games, the seniors have shown off statistically. Ollendick-Smith, a middle blocker, leads the Class 8-A-Private region in hitting percentage and blocks with .317 and 49, respectively, on the season. Wheeler, an outside hitter, has 298 digs which leads the region, as well.

Still, the three Spartans will help Athens Academy in its search for another region championship and state playoff run.