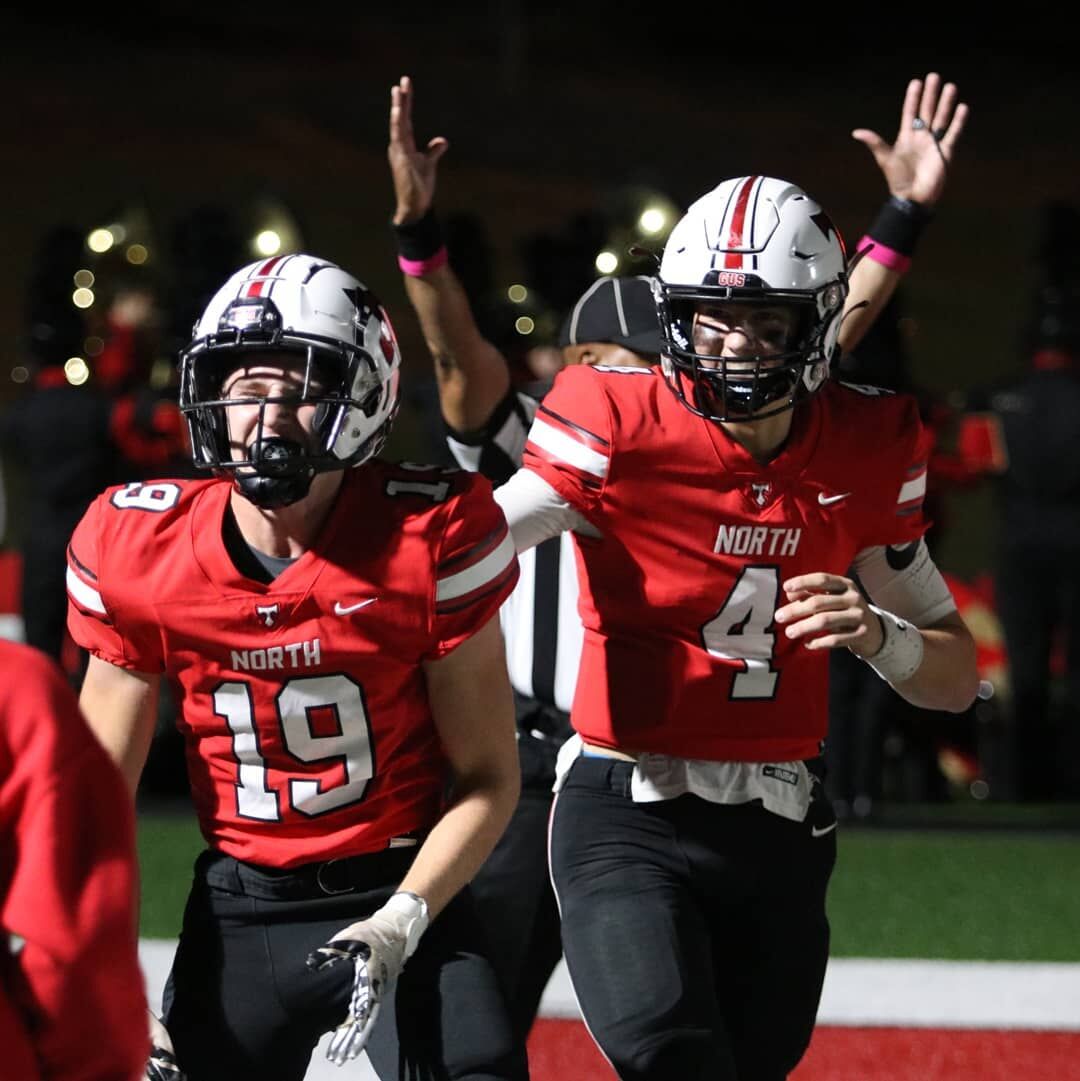 Eli Warrington and Bubba Chandler celebrate after a touchdown pass in the second quarter of Friday's win. 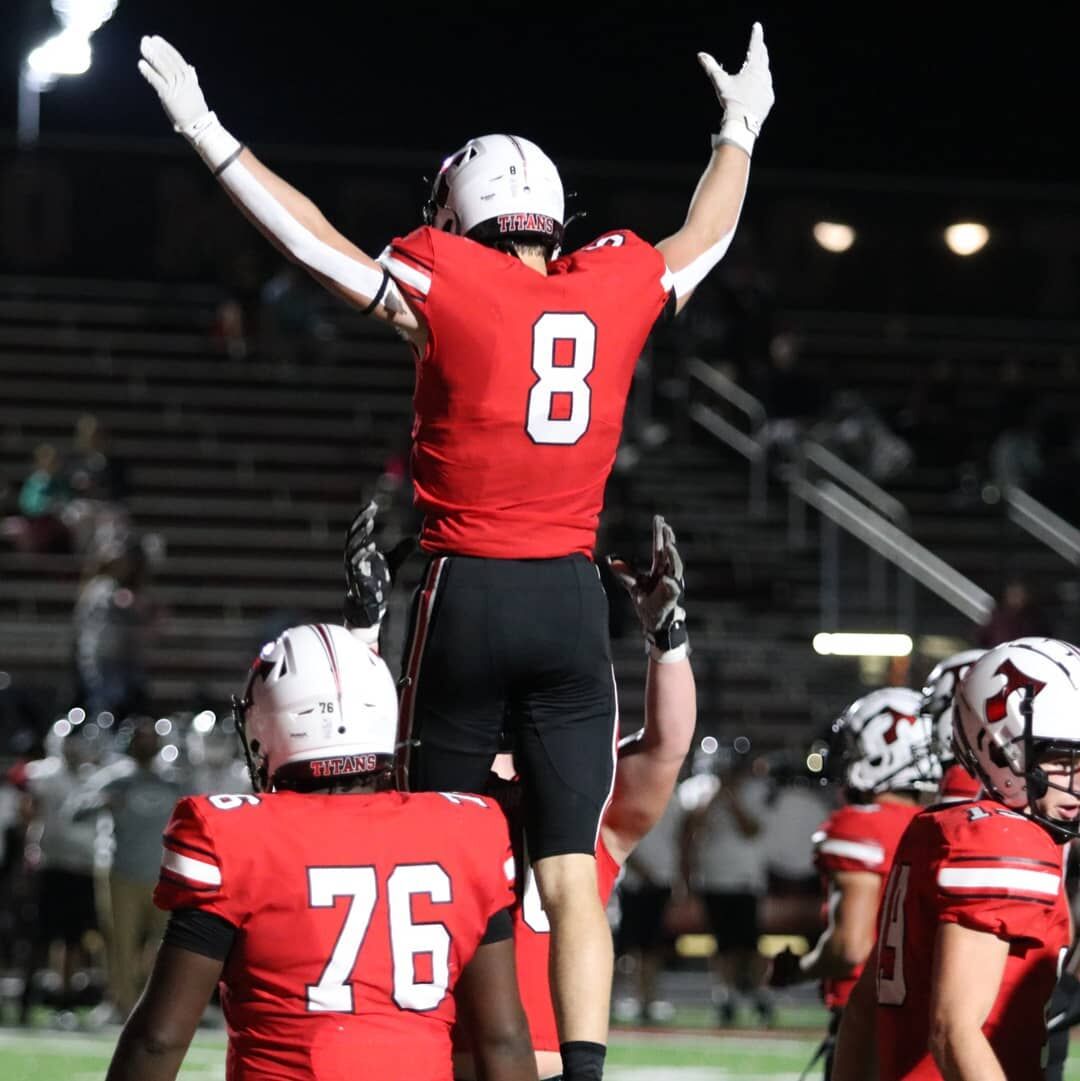 Gavin Bloom is lifted by a teammate after his touchdown in the second quarter on Friday night.

Eli Warrington and Bubba Chandler celebrate after a touchdown pass in the second quarter of Friday's win.

Gavin Bloom is lifted by a teammate after his touchdown in the second quarter on Friday night.

North Oconee High School football players ran toward the Titan Stadium fieldhouse. A few hops and hollers could be heard.

As players filled into the locker room following the Titans’ (2-4, 2-0 Region 8-4A) 44-0 trouncing of Chestatee High School (0-5, 0-2) an assortment of hops and hollers continued in a splatter as the assortment of hip hop began to filter from the open doors around the fieldhouse.

The Titans are enjoying celebrating wins. Their head coach Tyler Aurandt wants them to soak them all in. After their 0-4 start, the Titans have felt the alternative and don’t take a single victory Friday night for granted.

“That’s one of the best feelings as a coach (watching those guys have fun) and to watch them in the second half,” Aurandt said. “We’ll take a deep breath and enjoy the moment. You don’t get to do that very often. I’m proud of our kids and the way they’ve kind of overcome the first half of the season.”

The Titans’ energy began way before the game. There were many dance routines that broke out around the team’s warmups. That energy landed the Titans a fast start once the game began.

CHS got the opening possession and drove the length of the field riding their rushing attack that accounted for 66 yards on the first drive. Their drive and momentum ended with a missed field goal.

The Titans held the Eagles to only 82 yards rushing on the night. The Eagles only managed another 16 yards on the ground the rest of the night.

The Titans quickly drove down the field and senior quarterback Bubba Chandler hit Chance Cross on a 21-yard touchdown pass. Chandler found Cross again on a screen that Cross turned into a 55-yard score.

The second quarter was all Titans. They found the endzone four times in the period. Chandler added to his touchdown total with two passes to Eli Warrington and another to tight end Gavin Bloom. Rodrick Finch scored the Titans’ lone rushing touchdown of the night on a 4-yard scamper. It was his only carry of the night.

“We wanted to come out fast and continue to build some momentum,” Aurandt said. “You come off a big win last week and we didn’t want to get complacent. We wanted to make sure we continued to get better.”

The 41-0 halftime lead triggered the Georgia High School’s mercy rule of a running clock in the second half, so most of the Titans’ starters only played one half of football on Friday night.

For Cross, Friday acted as a bit of a confidence booster. Cross had a few drops in the Titans’ loss to Benedictine High School on Sept. 25. For the Titans, getting Cross involved will be a big part of what they do going forward. Cross is the Titans’ fastest player.

“We’re going to need that guy because he’s so dynamic with his speed,” Aurandt said. “He brings something to the table that nobody else on the team can because he is the fastest kid we have. We’ve tried to do a couple things to get him the ball. Whether it’s broken down in coverage or at the line of scrimmage and we couldn’t get it to him, tonight, we wanted to make sure we got it in his hands. We felt we could throw him some screens and let him just get out there and make something happen and he did.”

The Titans’ leading receiver from 2019, Warrington, established himself with a few authoritative plays on Friday night. Warrington caught a screen and weaved in and out of the defense for a touchdown. His second catch saw him wrapped up by much of the CHS defense, but he carried the momentum for about 10 extra yards.

“We’re all just about playing as hard as we can, with everything to the whistle,” Warrington said.

The Titans will travel to Flowery Branch High School (3-2, 0-1) next week.